admin Thursday, June 3, 2021 Comments Off on Gorilla Scarecrow Versus COVID-19

Residents of Chikuzen Town, Fukuoka Prefecture, in Japan, have constructed a 23-foot-tall “gorilla scarecrow” as a symbol of the power and strength that are needed to scare away COVID-19. Construction of the gorilla scarecrow, which is made of a steel frame covered with rice straw that resembles gorilla fur, took two months. The gorilla scarecrow’s open mouth reveals terrifying fangs.

Don’t Park On My Pants

Parking spots are hard to come by in the West Ridge neighborhood of Chicago. During the winter, resident Adam Selzer became the talk of the neighborhood for the novel method he used to save his spot: he froze pairs of pants and stood them up on the street as if they were traffic cones. “Soak a pair; put them outside,” Selzer advised. “In about 20 minutes, you can form them to shape; and in another 20 they’re solid,” When the cold weather returns, Selzer plans to perfect a frozen shirt. “We’ll see if this works,” he said.

Tessica Brown of New Orleans wanted to go out. So she reached for the only spray she could find, Gorilla Glue, to shellac her hair into place. “I figured … I could just wash it out,” she later said. But she couldn’t. Brown and her mother tried olive oil and vegetable oil to no avail. And the local hospital could offer little help. She cut off her ponytail to reduce the weight. But the hardened glue on her scalp continued to painfully tighten and harden. She eventually flew to Los Angeles to meet with plastic surgeon Michael Obeng to undergo a procedure that costs more than $12,000. But Obeng waived the fee.

Joe the Pigeon was named after President Joe Biden after he was found in a Melbourne, Australia, backyard. A band around his leg suggested he was a racing pigeon from Oregon — 8,000 miles away. Australian authorities declared the bird a biosecurity risk and announced they would have to euthanize him. But Joe received a last-minute reprieve when Deone Roberts of the American Racing Pigeon Union declared that the band around Joe’s leg is “counterfeit and not traceable.” Australia’s Agriculture Department, stated that Joe “is highly likely to be Australian.” It said it would take no further action against him.

Well, The Excavator Was Just Sitting There …

Neighbors in Fort Lauderdale, Fla., called police after they saw a man take a joyride on an excavator that had been parked in the street. After he knocked it into some power lines, he made a getaway on a bicycle. The incident resulted in a power outage a half hour before the Super Bowl. Crews from Florida Power and Light attended to the problem, and the power was back on by halftime.

New Things To Worry About

Bradford Gauthier of Worcester, Mass., had a bit of trouble swallowing when he woke up one day. But he drank some water and went about his day. Later, he said, “I tried to drink a glass of water and couldn’t.” At some point, he realized one of the AirPods he sleeps with at night was missing. He noticed that he “felt a distinct blockage in the center of [his] chest.” It didn’t take doctors in the emergency room long to discover the AirPod lodged in Gauthier’s esophagus. It was removed in an emergency endoscopy.

I’m Not Really A Person

Jane Louise Kellahan, 49, of Wanaka, New Zealand, appeared before Judge Russell Walker in Queenstown District Court on a charge of assault. She refused to answer when she was called on. “That sounds like my name, your honor, but I want to see it in writing,” she said. Kellahan, a local artist, denies being a person; rather, she says, she is just “a living being on the land.” The judge told her, “You are a living being, which means you are a person.” The judge entered a plea of not guilty on her behalf.

The San Diego City Council recently blocked funding for its controversial smart streetlights program, which features not only streetlights but also a video surveillance system that has been used by the San Diego Police Dept. Last fall, Mayor Kevin Faulconer ordered the cameras turned off. But the cameras and the streetlights are connected to the same power supply. Turning off the cameras would have left the city in the dark. The Florida-based Ubicquia company, which owns the technology, has been reluctant to work with the city because of unpaid bills amounting to $771,000. Meanwhile, the cameras are still recording and storing footage for five days.

In the middle of the night, police in Bellevue, Wash., spotted a car running a red light. They ran the tag and discovered the car had been reported stolen. The driver failed to yield when officers attempted a traffic stop. But a mechanical problem in his vehicle prevented him from going faster than 25 mph. In addition to driving slowly, the driver observed all traffic laws. The pursuit continued for a mile and a half until the vehicle burst into flames. The male suspect fled into a nearby nature park and escaped.

I Love Me A Cardigan Sweater

Boston’s RR Auction continues to sell off presidential artifacts. Recent items were locks of George and Martha Washington’s hair, John F. Kennedy’s Harvard cardigan sweater and the pen Warren G. Harding used to end U.S. involvement in World War I. A total of 300 such items have been sold this year. Last year, the company sold a lock of Abraham Lincoln’s hair wrapped in a bloodstained telegram about his 1865 assassination for $81,000. 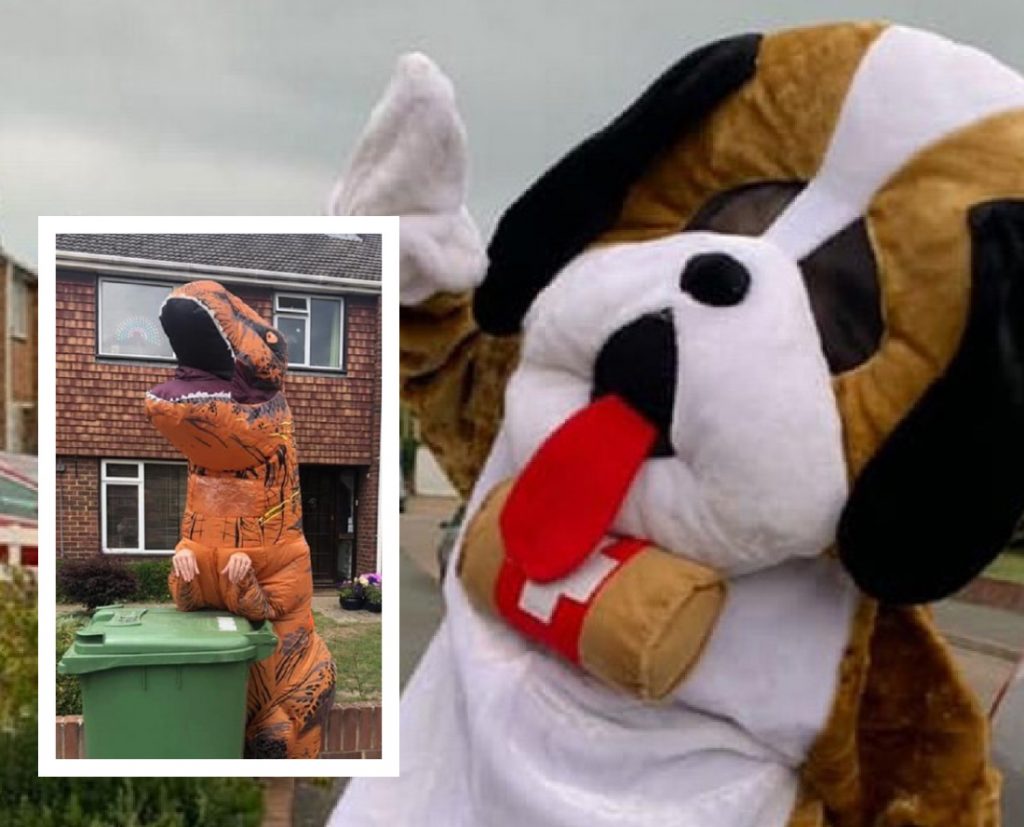 Andrea Belcher of Surrey, England, was looking for a way to have a little fun during COVID-19 lockdowns last year. She hit upon the idea of dressing up in a ball gown to take out the trash. Since then, she has dressed up each week as a famous personality or fictional character. So far she’s appeared as Darth Vader, Marge Simpson, Wilma Flintstone and others. She’s even recruited the family dog to play Toto to her Dorothy. “Everything is a bit miserable at the moment,” Belcher said. “So it’s nice to have a little bit of silliness, a little bit of craziness, and to make people smile.”

Life At The Top

Rapper Lil Uzi Vert, whose real name is Symere Woods, revealed on Instagram that he has had a $24-million 10-carat pink diamond implanted in his forehead. According to Simon Babaev, spokesman for the New York-based jeweler Eliantte & Co., Uzi fell in love with the marquise-shaped diamond when he saw it in 2017 and has been making payments on it as he determined what he wanted to do with it. “We didn’t think he was serious about it,” said Babaev. But as it became clear that he was, “we engineered a specific mounting that clips and locks in place.”

I Thought I Forgot My Finger

Deputies of the Anderson, Tenn., County Sheriff’s Office responded to a report of a stolen log splitter. They discovered a severed finger among the items at the scene. Hugh Seeber, 50, later appeared at a local medical center with a missing finger. Seeber was charged with felony theft.

Those Hot Springs Aren’t For Cooking

A man from Idaho Falls, Idaho, pleaded guilty in a Mammoth Hot Springs, Wyo., court to walking in restricted areas of Yellowstone National Park. Park rangers had found him near a hot spring with a cooking pot and a burlap sack containing two whole chickens. He was accompanied by a group of 10 people; they were also carrying cooking pots. The man was ordered to pay fines and has been banned from Yellowstone for two years.

Officer, I Have No Idea How That Money Got In My Underwear

Police in Boa Vista, Brazil, raided the home of Sen. Chico Rodrigues as part of an ongoing investigation into government corruption. They found that the senator was hiding $5,400 in his underwear. Rodrigues had no explanation for the money in his briefs and claimed innocence.

Instagrammer Matt Shirley recently conducted an informal survey of his more than 300,000 followers, asking them which state they hate most. From the 2,500 responses he determined that the state the residents of Florida most hate is … Florida. The Sunshine State was the only one to choose itself as most-hated, with four-fifths of respondents taking that stand. “I live in Florida, have my whole life, and would not hesitate to unironically put that as my answer,” one survey participant wrote.

About the author: admin View all posts by admin

Trapped Due To Missing Stairs

Surfing With A Wild Pig

Waiting On The Bus

Violent Crime in the Lake Area

Friday, May 6, 2022, Comments Off on Violent Crime in the Lake Area

Friday, May 6, 2022, Comments Off on Ukraine’s Struggle For Independence

Trapped Due To Missing Stairs

Friday, May 6, 2022, Comments Off on Trapped Due To Missing Stairs