Roughly a year ago, news broke that Lake Charles was going to be the recipient of a new Torchy’s Tacos. Those who have experienced dining at other Torchy’s locations were singing the praises of its tacos, while the masses who had never had such pleasure were drooling in anticipation.

Every new restaurant needs a moment or two to train its staff in real world exercises. The execution, the delivery, the menu and so forth. The soft opening begins with two simultaneous avenues. One is a special invite for guests to experience the indoor seating and get the feel of the building. This trains the front-of-house staff. Second are walk-ups and to-go orders, which are part of the new norm due to COVID.

My wife and I ordered tacos to go. It was a fairly straightforward process. We stood in line at the makeshift tent, ordered a couple of tacos for which we were assigned a number. We parked our vehicle and the staff brought our order to us once it was completed.

Honestly, first impressions fell short. The tacos were a discombobulated mess, a bit runny, a little cold and just underwhelming.

As a couple of weeks went by, I noticed a few hit and miss responses to the overall output. As I’ve mentioned several times, I don’t like going into a new restaurant when they’re still trying to work out their kinks. However, how much time does a restaurant need to put out a few tacos? 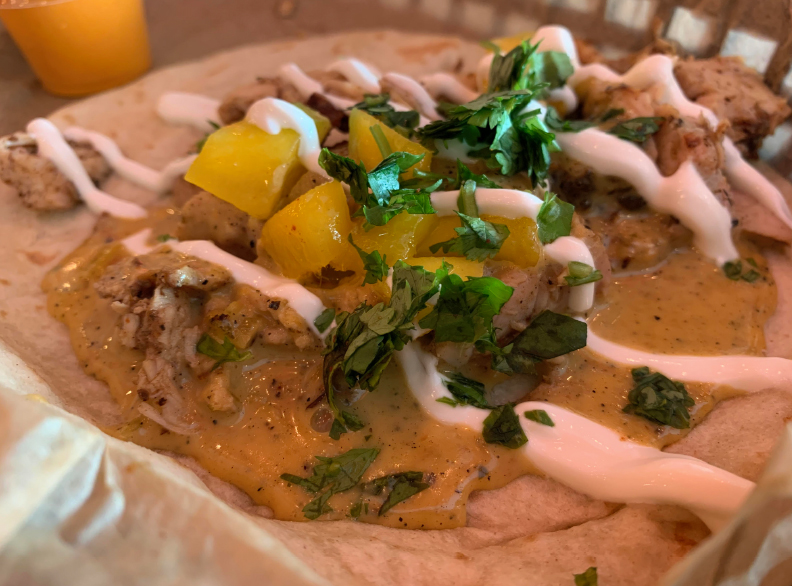 I got a text from my wife saying she had secured a spot at the bar and she was waiting for me. Now, this was my first time in the building and there was a lot going on. There was a line of people getting their to-go orders and people spaced out throughout the restaurant to dine. The space is open; has a bit of an industrial feel; but is bright and colorful.

Blake was the first to greet me. As the evening went on, it’s fair to say, he was pretty much the one who knew everything that was going on. He was being pulled on in every direction.

The menu was touchless. Basically, you scan the code on a display and the menu will pop up on your phone.

My wife and I sorted through the various taco options. It seemed to us the queso was one of the biggest hits. It comes in a few different varieties, but the basic is a cheesy dip with green chiles, grated cojito cheese, cilantro and diablo sauce.

It seemed there was a huge gratuity in the salting of the chips. The term, “less is more” could definitely be applied in this instance. But the dip looked promising. Just make sure your drink is within reach.

As this was our introduction to the full Torchy’s experience, we didn’t realize that comedy was included and it went on all night long. The queso that was placed before us was not what we ordered, nor was it the size we ordered. It belonged to three gentlemen adjacent to us at the bar. Once the delivery staff realized their mistake, I couldn’t help but compliment these gentleman on their choice of queso with chorizo.

At this point, our correct order was brought out. Now, we were two appetizers deep and ready to order our tacos. This was the point when the three gentlemen finished and left. A young couple sat down in their place.

It appeared we all had ordered at the same time. The food was delivered promptly. Within minutes, we had another order being served directly to us. This was very confusing. We looked over to the couple, and sure enough the staff was trying to give us their food. Back to the kitchen goes the tray. It was understandable; it was one of those communicative skills that still needed to be worked out.

As for the food, it certainly lived up to the hype that Torchy’s was coming to town. My wife ordered a fried avocado taco and a bowl of street corn. I don’t know whether you’re familiar with fried avocados. For some restaurants it works, for others, it’s a fail. I think the idea is usually better than the outcome.

However, I can tell you this was one of the most well-executed and impressive versions of a fried avocado I have ever tasted. It had a thin dusting of a Panko-like crust; was briefly fried and served on a tortilla with all the trimmings. It’s a fantastic meatless option.

I ordered a Caribbean jerk chicken taco on flour. It had the right amount of heat and spice to let me know I was getting that jerk flavor in a juicy and tender chicken. This will definitely be a favorite.  Alongside that, I went with a Baja shrimp, served trashy. It was good, but the pickled onions seemed to be on the forefront of the taste.

Did it live up to the hype? Was it all really worth the wait?  Hell, yes. It was entertaining, it was fun, it was damn good food. Blake makes an excellent margarita, he’s informative and personable and made our night a blast. 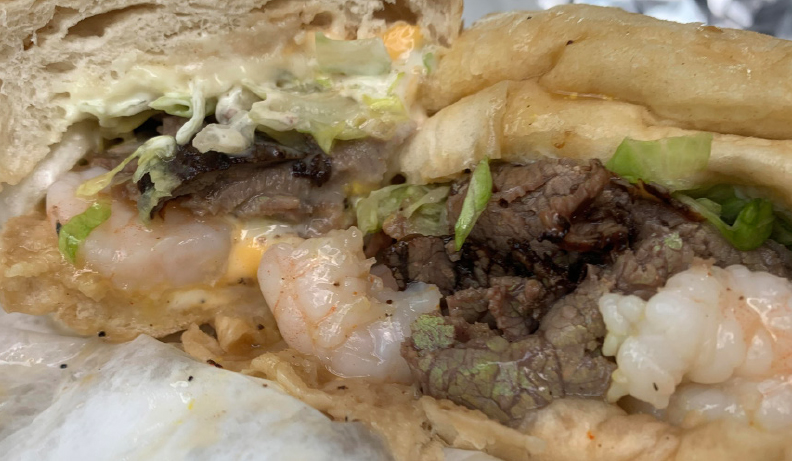 Here’s a shout out to those looking for a good spot for grub in Oberlin. If you find yourself in the area and you want a really good meal, you have to check out The Crawfish Shack, located at 807 W. 7th Avenue. I caught a glimpse of one of their poboys a few days ago and figured it was definitely worth the visit.

I stopped in for lunch to find there was more than just poboys. They have a lot to offer, and the menu changes seasonally. There are kids’ baskets, crabs and shrimp, appetizers and, of course, crawfish, when it’s in season.

The Crawfish Shack is a drive-through daiquiri and drink post, with indoor seating, an outdoor patio, and plenty of parking. I decided to pick up a large surf and turf, complete with jalapeño mayo, hot roast beef, fresh boiled shrimp, cheese, mustard and lettuce, with a flaky and tuggy bread. It wasn’t ooey and gooey with gravy dripping everywhere. It’s was just a hefty and tasty poboy served up with smiles.

About the author: Bill Coyne View all posts by Bill Coyne

The Tale Of Salt: The Orphaned Opossum

Thursday, November 19, 2020, Comments Off on Bigger And Better Adventures

A LONG, STRANGE TRIP SO FAR

Thursday, November 19, 2020, Comments Off on Traditions

PICKING UP THE PIECES

Thursday, November 19, 2020, Comments Off on PICKING UP THE PIECES