If you were wishing for some real winter weather, pray no more. Old man winter arrived early this year, with sub-freezing temperatures gripping most of the good old USA.

Hunters everywhere are grateful for these early Arctic fronts that jumpstarted the rut and got the bucks up and moving. It is early for these major cold fronts to drop the temperatures way below freezing and they’re not coming a moment too soon. 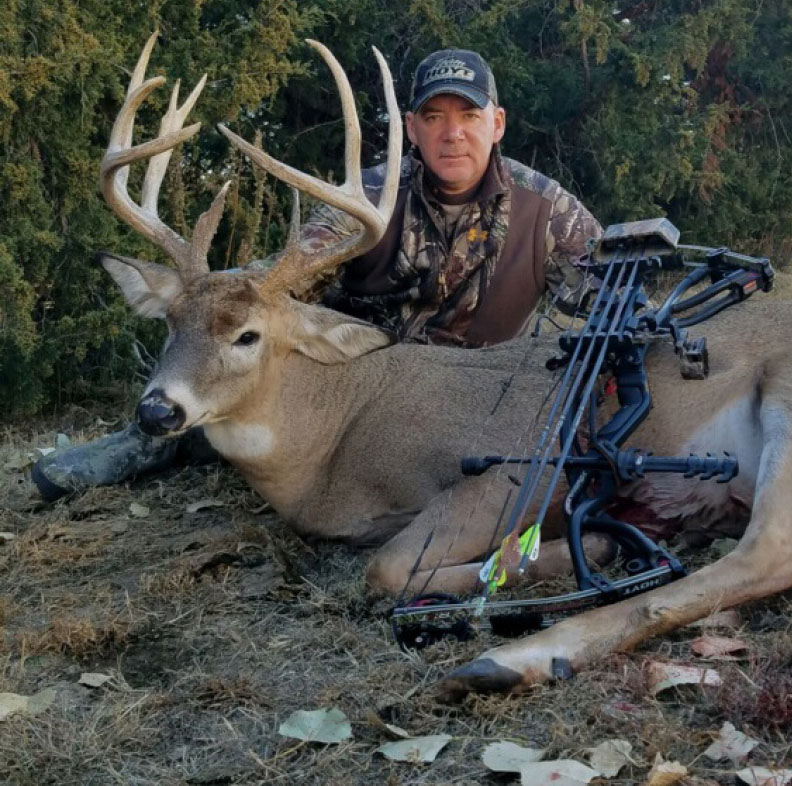 Local bow-hunters headed west to Kansas in their quest for a bruiser mid-western buck. Armed with bow and arrow and an extra pair of warm underwear, Troy Tate was Kansas bound.

Drawn by a pack of does close by, a mature buck approached Troy’s stand, and he went on autopilot. At 30 yards, it was show time, and he released a deadly accurate shot. The heavy white horns on this buck’s head had it all. The long tines carried heavy mass all the way to the tips, and Troy could not stop smiling.

His hunting compadre John Savage also made a sweet shot on a non-typical Kansas buck weighing in at nearly 300 pounds. These Kansas bucks have it all in massive body weight, with heavy horns to match.

Hunting near Comanche, Kansas, local archer Jeff Scarborough scored his third personal best buck in a long line of awesome deer. The cold winter weather had the bucks up and searching for lady love. Jeff was in the kill zone.

Kerry Savant accompanied Jeff, and also stuck a world-class Kansas buck of his own. His target practice paid off big dividends when the moment of truth arrived. He pinpointed a deadly shot to the vitals mainly by perfecting his aim on the practice range. There is nothing that can replace repetition when you’re executing a shot on a Kansas wall-hanger. 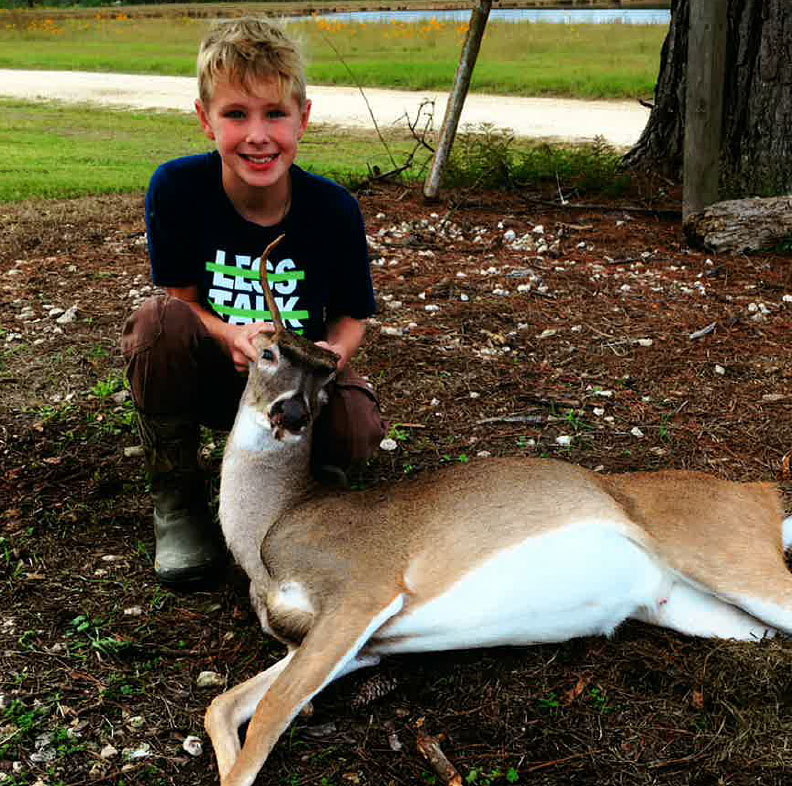 Blake Farr with his first buck.

Locally, Tony Bragg was ready and waiting for the opening of rifle season. Hunting near Merryville, he put a sweet shot on a drop-tine buck. Tony has put together an impressive list of mounter bucks from none other than sweet home, Louisiana, and this buck is no exception.

Duck and goose seasons kicked their opening off to somewhat weak numbers. Duck hunting numbers have been weak so far, with specklebelly geese picking up the slack in select areas. This harsh winter weather should push some birds south and put a hard freeze on their available habitat. Hopefully, the local hunting should improve, as the crux of the population of migratory waterfowl heads south.

It has been an auspicious start to a hunting season with harsh early winter weather to be thankful for. It has been an encouraging early season start complete with freezing weather to get it kicked off. There is a lot of season yet on the table, so remember to pace yourself.

Check out nine-year-old Blake Farr with his first buck taken near Longville, La. Blake is a natural deer hunter, just like his grandpa Randy! A new hunter is born.

Meanwhile, get out and support your local Cowboys. McNeese athletics is alive and competing well. All they need is local athletic supporters to fill up the seats and cheer them on. Go Cowboys, and Cowgirls, too!

Purpose for the Sake of Purpose

Monday, September 20, 2021, Comments Off on Purpose for the Sake of Purpose

A Foundation Of Bowling Balls

Monday, September 20, 2021, Comments Off on A Foundation Of Bowling Balls

Monday, September 20, 2021, Comments Off on Curiouser And Curiouser

Monday, September 20, 2021, Comments Off on A Completely Different Atmosphere